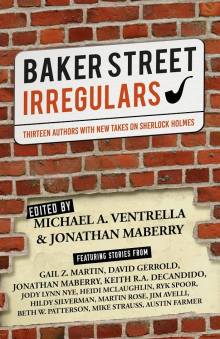 his month is Baker Street Irregulars, a new anthology of alternate Sherlock Holmes stories edited by Michael A. Ventrella & Jonathan Maberry. Keith talks about his contribution to the anthology, “Identity,” a tale of a young woman in modern New York City named Shirley Holmes and a young African-American medical student at Columbia University named Jack Watson, as they help a young woman whose fiancé has gone missing.

Keith reads “Identity” and talks all about BSI, as well as his plans for future Shirley-and-Jack stories, including “Six Red Dragons” for Volume 2 of BSI in 2018.

I didn’t mention this specifically in the podcast, but if you want to read the Sherlock Holmes stories of Sir Arthur Conan Doyle, you can read them all at the Gutenberg Project.

Upcoming conventions Keith is attending that are mentioned in the episode include HELIOsphere, I-Con 32, (Re)Generation Who 3, Central Pennsylvania Comic-Con, Lunacon 2017, and Zenkaikon 2017.